From Jeff Dee, Habitat for Humanity of Metro Maryland, Inc.

An Interview with a Home Repair Client

I am very delighted to introduce you all to a very special client – Ms. Joan.  What makes Ms. Joan special is that she is the first client to benefit from all of the Home Repair Services that HFHMM has to offer. Ms. Joan has been served through the Montgomery County Homeowner Energy Efficiency Program, Weatherization Program, Home Repair Program, and our newest the CAPABLE Program.

Ms. Joan moved into her Montgomery County home in 1996 after leaving her native home in British Guyana (a country located in South America) and since then has retired from a long and fruitful career in accounting. These days, you can find Ms. Joan at home enjoying life with her daughter, growing plants, and taking daily walks throughout her neighborhood.

Ms. Joan first came to Habitat through the Montgomery County Homeowner Energy Efficiency Program where she received appliance upgrades at no cost to her. She received brand new energy star certified clothes washer/dryer and refrigerator and attic insulation and fan! But the work didn’t stop there – she also applied for our CAPABLE program so that she could work with an Occupational Therapist and a Registered Nurse and receive accessibility modifications. We were also able to provide larger repair/weatherization items because Ms. Joan qualified for our traditional Home Repair and Weatherization Programs. Examples of the work include:

We asked Ms. Joan if she wanted to share what her experience was like throughout this process and here is what she had to say:

“The repair and weatherization program was very helpful financially, since I am retired and have a limited income.  I also appreciated the safety features, such as the grab bars in the bathrooms and the handrail along the driveway.  The CAPABLE Program was informative in the prevention of falls and helpful with health issues.  I am very thankful to Habitat for Humanity for making it easier for me to remain in my home as I get older.”

If you or someone you know is interested in receiving any of the services mentioned above, please visit our home repair services website and see what program works best for you! https://www.habitatmm.org/home+repair

I recently had the pleasure of meeting Elias (our very first CAPABLE client) at his home in Kensington, MD. Elias is an older adult with high energy, a fun personality and many interests/hobbies. He was born on the border of Israel and Lebanon, has traveled and lived in various countries and can fluently speak in 5 different languages. Elias worked for the DC government for many years and now spends his time doing what he loves – studying different cultures and languages. He is currently studying Hebrew! These days, you can find Elias enjoying lunch every day at the Holiday Park Senior Center. 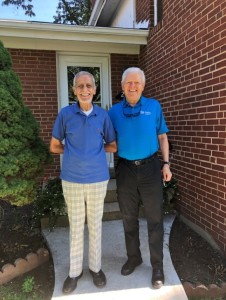 Elias has been living in his home for over 20 years now. His home was built in the early 1950’s and needed some work which is why he reached out to Habitat and we were glad to help! Habitat performed a home visit and a whole home audit to identify, create, and prioritize health and safety related repairs.

If you or someone you know is interested in receiving services through our CAPABLE program, you can download the application HERE or contact our Repair Client Coordinator Rebecca Arce for more information at (301) 990-0014 x 19.

HFHMM CAPABLE is a supplemental and/or stand-alone program which serves older adults experiencing challenges with Activities of Daily Living (ADL’s) by providing a more holistic approach to the idea of Aging In Place. With the CAPABLE program, income qualified older adults are paired with an Occupational Therapist and Registered Nurse, both of whom will conduct a series of visits in order to assist in the identification of challenges, setting of goals, and outlining of action plans for those goals. Within the parameters of the program, Habitat for Humanity is able to provide minor home modifications per the recommendation of the occupational therapist, which are geared toward improving independence.

I recently had the pleasure of meeting Richard at his home of 28 years.  Richard served in the US Army for 30 years.  Richard was trained as a combat medic and achieved the highest rank of Sargent First Class, or senior non-commissioned officer.  He also received the Meritorious Service Medal presented to members of the United States Armed Forces who distinguish themselves for outstanding achievement or service to the United States.  Richard enjoyed interacting with military families and “liked to help them ease into military life.”

In addition to his long military career, Richard was educated in Psychology, studied at Howard University, was trained as a Hypnotherapist and is currently certified to administer Reflexology.  There is a spiritual quality to Richard’s desire to help people deal with the stresses of everyday life.

Originally from Cherry Hill, New Jersey, Richard is a huge Philadelphia Eagles football fan and was “thrilled beyond belief” when they won the Super Bowl last year.

Richard’s home is comfortable and welcoming, but there were several repairs that needed to be done and Habitat responded by matching a priority list of critical repairs with available funding.

Funding from the Maryland Energy Administration (MEA) covered weatherization services including CO Monitors, Insulation, and a programmable thermostat.  Habitat was able to secure help from the Home Depot Foundation RepairCorps program for veterans that provided funding to replace the roof, a rear door,  the tile floor in the kitchen, a bathroom window, and to make repairs to walls.

Habitat was honored to be able to make a difference in the life of someone who served his country with distinction.

Thank you for your service Richard!